Assessing one’s progress at work or in love, a gamer comes to wish for check points, highlighted context clues and back alley secrets to easy success, feedback and achievements, a little something to show for his efforts. The gamer understands hierarchy and limited upward mobility, will grind for loot and greater status – provided, of course, that the world has been properly designed. Gamer logic: if the city should crumble into the sea, search the trash cans for ammo cartridges. Neighbor’s dog keeping you awake? Let me at him. I will put down the snarling beast and from his hide fashion wallets, armor, sharper weapons for fiercer foes. On Church Street, no particular Tuesday and with the clarity of an atheist’s vision, the gamer imagines coins hiding inside certain sacred bricks. A villain like the terrorist leader Inferno would have his work cut out for him: drop the bomb, strike it rich. 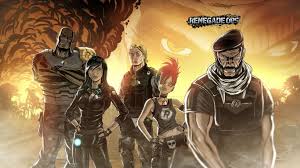 If we are to make any sense of the world the teams at Avalanche and Sega have presented us in Renegade Ops, we must conclude that Inferno is just a patsy. The war is bought, sold, and paid for, a spectacle for the real villain who has already won. The heroic Renegades – Roxy, Diz, Armand, and Gunnar, assembled by the ubiquitous General Bryant – relish their orders to bring down the fiery strawman with a fiercer, a bloodier, a sharper-fanged brand of ultraviolence.

We find in the opening cutscene definitive evidence of our avatars’ complicity in a conspiracy of silence between two megalomanical leaders. Bryant rips the medals from his uniform and swears unilateral intervention at the first sign of delay from – for our purposes – the UN.

Shortly thereafter, Inferno smells the petrol trademark of Bryant in the exhaust fumes of our avatars’ mass-murder cars. “Bryant! I should have known it was you!” Who else would it be? What other General would have access to an endless inventory of munitions? Who else but Bryant’s ragtag team would bring Jeeps to a genocide-fight? Should we be surprised that, with each conspicuously deathless defeat, Inferno vows to return better fortified like a paid-off boxer who has just thrown a match?

Are unnerving little details like these the fingerprints of a go-between arms dealer’s Invisible Hand, distributing comparable weapons to terrorist and Renegade? No cutscene shows the arms dealer’s face. Nor do the later twists in the narrative spell out his name (from what I can gather). Yet he exists, he must exist. Surely as the vehicle of our selected avatar trembles in syncopation with the rumble feature of the Windows compatible XBox 360 controller in our hands, a bomb does not construct itself.

At any rate, the future is bleak. There will be war, fiery war, unending ever-profitable war. The revolutionary gamer sees war’s function as primarily land-grabbing. The Too Bloody Rich take by force the soil from beneath the sandal-less feet of those who Have Little Else, shake every penny loose from the indigenous couch cushions, and stuff one’s overseas accounts with stolen loot. Dirty money that should never have been theirs to invest stews, and wealth-adoring alchemic interest-rates slow-cook the copper into a petulant pus-gold. The powerful fingers of one warring nation pick at them and the accounts boil over. Pockmarks on the Swiss mug of the Big Cheese. Now, the adversarial nation must defend against preemptive attacks and feverishly demands bombs of its own. In come its own filthy fingers. The infection spreads. The true nature of war’s unsavoring hunger is to perpetuate itself, integrate its machinations with the Zeitgeist, to become interminable and economical, to be a fact of life.

The terrible truth of war tends to arrest the progression of logical inquiry and, instead, to inspire pity and despair. Bryant mustn’t hear our misgivings about the realities of war. We’ll keep them to ourselves. As is the case in all conversations with power, the revolutionary gamer must withhold the truth from the avatars of power. We the powerless players have no use for truth.

Truth is, self-professed renegades rarely go it alone. Much as we might prefer to ignore it, a single-player gamer – nerd, geek, wimp, loser, voyeur, creep – sitting alone in the dark stifles any chance of his becoming a participant in the sexual revolution always on his mind and just out of his reach. In the traditional view, playing video games, a distinctly solitary endeavor, impedes social change in the real world. There he sits with his toys, making nothing happen. The Downloadable Content craze, clients like Steam and Origin, and Cloud saves requiring an internet connection during single-player campaigns seek to correct, via new methods of capitalistic aggression, the lone gamer’s unexcused temporary absence from the marketplace.

Online multi-player gamers network with the disembodied voices of faraway friends, play digital ghost-whisperer at a cyber-seance, effectively dead to the outside world. It is no accident that we feel most alive in Renegade Ops when, given the opportunity, we find ourselves reliving the 8-bit era gone-by in its local co-op campaign, where P1 and P2 make the beast with two hearts and four hands in the bluesy river-light of one shared monitor; where the world of the flesh and the realm of the sprite couple as one, and the screen splits to accommodate our interdependence. Two guns are better than one.

Inferno’s tanks and mortars would make a My Lai of every village, would die trying. Inferno has minions the world over, willing to strike blows in different area codes. His only peer in power and influence is our fearless leader Bryant toting the oppositional party line that his Renegades’ might makes the retaliatory cause right.

Power does not believe but, rather, knows there are pennies in the bricks of the Church. Power need not have them planted there to be discovered, for instance, by the jump of a princess-obsessed castle-plundering plumber. Indoctrinated by Bowser in his cathedrals of dungeons and corridors, no enemy of Mario was ever surprised by the apparition of coins from a broken brick. They are bound to a code, a conspiracy of silence. No inquiry as to where the coins came from, who put them there. Indoctrinated by Inferno, no enemy of the Renegades puts down his gun, none refuses to give blood to the war effort. No flame burns the Invisible Hand which feeds it. Nor should we, in-game.

Take it on faith, good Renegades. Match Inferno simulated war crime for simulated war crime. Slaughter the agitators. Rescue the hostages, bring them to the Church. Play your assigned role, fall in line. And stepping out again into the world of the living, for the sake of all good things spiritual and corporeal, think about what you’ve done, what you’ve cooperated in – and discuss.

5 thoughts on “Renegade Op[timism] for the Revolution”